Where is the best location on Earth for solar energy?


In previous posts, we explained how to determine if solar panels are worth it and we outlined the top five factors that influence the solar energy potential of a site. These factors are latitude, cloud cover, aerosols, elevation and shading. Not surprisingly, the site with the highest solar energy potential on Earth happens to be near the equator, surrounded by an arid climate away from major sources of pollution, and it also happens to be on a plateau. Welcome to the Atacama Desert in Chile: the top solar spot on Earth, with annual solar production of more than 9,000 kWh from an average-sized (5kW) residential solar panel system. Atacama is a plateau on the west side of the Andes mountains and it covers a strip of land about 1,000 kilometres (600 miles) long.

What makes Atacama the best solar energy spot on Earth?

A combination of factors renders Atacama the perfect solar spot. It is relatively close to the equator (28 degrees South) and therefore has a high energy density. More importantly, Atacama is dry, very dry. In fact, it is considered as the driest place on Earth. Some of the weather stations in the area have not recorded a single droplet of rain. Since cloud cover accounts for about 20% of the atmospheric absorption, the absence of clouds in this area gives a very sizable boost to solar radiation levels. The third contributing factor is elevation: the Atacama plateau is significantly above the sea level.  Most sites in the area are at an elevation of 2400 meters (8000 feet). As you may recall from an earlier post, higher elevation means less atmospheric absorption and consequently higher levels of solar radiation. The absence of significant human presence in the area also means less industrial and urban pollution, limiting the level of aerosols in the air.
Interestingly, these conditions are not only important for solar energy. High-altitude, arid conditions and lack of major urban centers make Atacama one of the most ideal sites for astronomical observations. It's no wonder that the region hosts some of the top observatories in the world, including the European Southern Observatory.

So how much electricity could we produce if we were to install an average-sized residential solar photovoltaic system at this site? A 5kW system (corresponding to about 20 solar panels), would yield around 11,000 kWh of electricity throughout the year. This is very close to the average household electricity consumption in North America. Energy Information Administration reports that in 2011, the average annual electricity consumption for a U.S. residential utility customer was 11,280 kWh. Simply put, 20 solar panels in the Atacama Desert would meet all the electricity demand of a household without any need for a supplementing energy source (of course solar electricity production has to be balanced to meet the demand pattern using batteries or a grid connection). 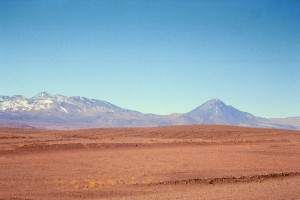 Atacama Desert near the border between Chile and Bolivia

Given this potential, it is no wonder that the region started to attract significant solar investment. In order to supply the mines in the region with electricity, an independent power producer, Etrion Corporation, is in the process of setting up solar parks with a combined capacity of around 100 MW.

Solar radiation levels are important, but so are the technology and economics of the investment

To be fair, Atacama is not the only location on Earth with a Solar Score of 100. There are quite a few locations around the globe with similar, albeit slightly lower, levels of solar radiation. However, most of these other sites are over the ocean around the equator and therefore are not suitable for solar energy installations. We should also mention that solar radiation levels alone cannot determine if investment at a particular location will be a winner or not. The other two variables of the equation, namely, technology and economics, should also be examined. Choosing the optimal technology to make the most of the solar energy potential is always an important factor. For example, a concentrating PV system at the Atacama site would significantly boost the output. Of course, the cost of the installation, financing options, net metering or a feed-in-tariff are also important things to consider. A solar energy investment on a site with lower solar radiation levels could be more profitable than the one at the Atacama site, if the economics are right.

We've seen the best site for solar energy on Earth, and the results are impressive. Why not Discover solar energy where you live!